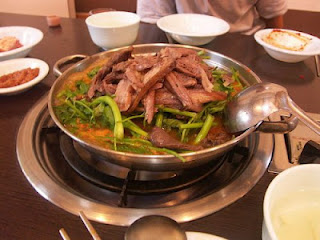 I'm going overseas again soon, looking forward to some of my favorite foods.  Although not a food I've tried, I'm reminded of when we were travelling several years ago and passed a restaurant in China.  Dong Lin restaurant's sign says “King of dog meat”.  Called Fragrant Meat (xiangròu), dog is not traditionally a delicacy, it's peasant food. These days though it has developed into a delicacy because it's becoming controversial.  The Don Lin restaurant is actually a small chain serving around 1 tonne of dog meat to at least 500 people each day and their specialty is dog hotpot.  Numbers from the 4th annual Yulin, Shaanxi ten day food fair that took place in May, 2011 state that 15,000 dogs were consumed.

The dogs are farmed much like sheep in Anhui province.  A brochure published by the Shenyang Agriculture and Science Development Institute, praised the St Bernards' "high farrowing rate", its "fine and tasty" meat and noted that its "gentle disposition is good for group breeding".  Returns from meat dog farming were four times higher than from pig farming, the brochure added. Song Shiyong, head of the Shenyang Dog Meat Research Institute said "St Bernard were four times more profitable to breed than pigs or chickens" and "This is a new way to prosperity".  Most of the dogs actually farmed, however, tend to be chow chow mongrels.  Keep that in mind the next time you order "chow mien" from your local takeaway. 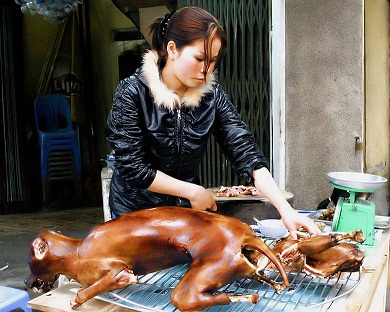 But if you think it's just China or some of the other Asian countries that have traditions of eating dog meat, you're barking up the wrong tree!  Let's have a look around the world...  The earliest evidence of dog consumption have been found at Gaulish archaeological sites all throughout Europe, with the discovery of butchered dog bones. 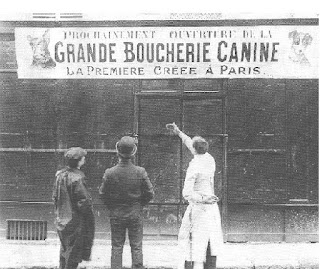 In France, although consumption of dog meat is not common, dog meat has been popular in the past. French news sources from the late 19th century carried stories reporting lines of people buying dog meat, which was described as being "beautiful and light." During the siege of Paris in 1870, there were lines at butcher's shops of people waiting to purchase dog meat. Dog meat was also still being sold openly by some Paris butchers in 1910.
In Germany, dog meat has been enjoyed in every major crisis since the time of Frederick the Great (mid 1700's) or possibly earlier.  It is commonly referred to as "blockade mutton".  In the early 20th century, the high price of other meat lead to Germans commonly eating horse and dog meat. In 1937, a meat inspection law targeted against trichinella was introduced for pigs, dogs, boars, foxes, badgers, and other carnivores. Dog meat was not prohibited in Germany until 1986.
In Belgium, butcher shops sold dog meat in early 20th century. The Council of the Veterinary School of Belgium recommended dog meat for human food.
In The Netherlands, sausages made of dog meat were commonly consumed in 1940s, however this is not currently widespread.
In Poland, the meat is not eaten today but in some rural areas of Poland dog fat is still made into lard for medicinal purposes. 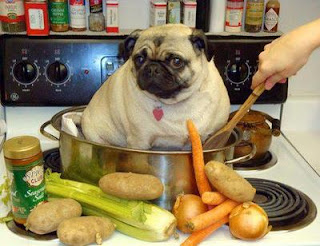 In Switzerland, the rural cantons of Appenzell and St Gallen are known to have had a tradition of eating dogs. Dog sausage and smoked dog jerky remains a staple in these areas as well as the use of dog lard for medicinal purposes. In a regional Swiss newspaper, one farmer was quoted "meat from dogs is the healthiest of all. It has shorter fibres than cow meat, has no hormones like veal, no antibiotics like pork." The commercial production of dog meat in Switzerland is, however, illegal.  Popular Swiss recipes for dog meat include gedörrtes Hundefleisch served as paper-thin slices, as well as smoked dog ham, Hundeschinken, which is prepared by salting and drying raw dog meat.
In India, dog meat is widely eaten by certain communities in the North-Eastern states of Mizoram and Nagaland, where it is considered to be a delicacy.  Hindus strictly avoid dog meat. 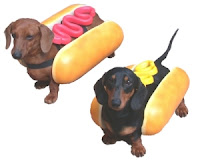 In North America, the term "dog" has been used as a synonym for sausage since 1884 and accusations that sausage makers used dog meat date from at least 1845.  Immigrants who were from Germany where consumption of dog meat was common brought their "Frankfurter" to America, where it was called hot dog because it was widely believed that it was made of dog meat. This belief was occasionally the truth.  In late 19th century, a cure for tuberculosis using an exclusive diet of dog meat was tried.  In the early 20th century, dog meat was consumed during times of food shortage and was sold openly in New Jersey butcher shops.
In the Kingdom of Tonga, the consumption of domestic dog meat is still commonplace and is also known to occur in migrant Tongan communities in New Zealand, Australia, and the United States.

Throughout Siberia, Northern Canada, and Greenland Dogs have historically been emergency food sources for various peoples. Sled dogs are usually maintained for pulling sleds, but occasionally are eaten when no other food is available. In the harsh wilderness of the Alpine, men are real men and dogs are man’s best friend and mans best food. 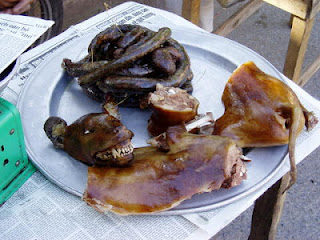 One of the risks of eating dog is the potential of hypervitaminosis A (vitamin A poisoning), if the dogs liver is eaten. Canines have a much higher tolerance for vitamin A than humans do which is in concentrated amounts in their liver.  Additionally the transmission of rabies to humans from dog meat consumption has been reported in two cases from China, one in Vietnam, and two deaths reported in the Philippines.  These cases may stem from improperly sourced or farmed animals so stop complaining and eat your chow.
In 1972 Frank Zappa recorded a song entitled Dog / Meat which is a musical ensemble of two of his songs Dog Breath Variations and Uncle Meat.
So go play frisbee in the park with Rover and you can round off the whole day with a good meal back home.
Posted by MrVampire at 3:47 AM