This groundbreaking Zombie Alert Meter from OMFGzombies is designed to give you accurate information about current worldwide zombie infection levels.

Stay alert with the OMFGZOMBIES Zombie Alert Meter (ZAM). Currently it updates every 1/2 an hour, ensuring you can take appropriate precautions when leaving the safety of your home. 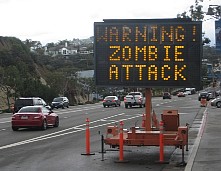 Lacking the sensual enthral of the vampire or the animal sex-appeal of the werewolf, zombies are very much the unwanted aged pensioners of the supernatural world.  The true zombie tradition originated in the Congo and was brought to Haiti by slaves.
Creating a zombie follows a process where a voodoo houngan creates a special powdery toxin that contains large amounts of tetrodotoxin from puffer fish.  The toxin in this powder is absorbed through touch contact.  After the victim is declared dead and buried, the houngan unearths the victim a few days later in ritual involving a second powder of hallucinogens. Between the brain damage from the first drug, being buried alive, then ritualistically dragged from the grave and the effects of the second drug, the victim was more or less stripped of their intellect and self-will.  Doomed to more or less behave like an undesirable aged pensioner.

The first ever zombie movie was White Zombie in 1932 staring Bela Lugosi and was a film interpretation of a stage play.  But it was George Romero's 1968 classic Night of the Living Dead that spawned the zombie film genre.  A genre which has lead to such great titles as: Chopper Chicks in Zombie Town, Nudist Colony of the Dead, Space Zombie Bingo, Zombie Ninja Gangbangers, Zombie vs. Mardi Gras, Psycho Zombie Love Butcher and not forgetting The Incredibly Strange Creatures Who Stopped Living and Became Mixed-Up Zombies.
A complete list of every zombie movie ever made (and some upcoming ones) is at The Zombie Reporting Centre.