Music with a banana 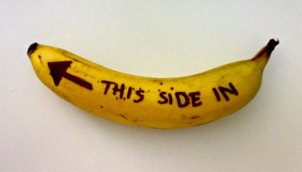 Oddly the one song that it appears not to work with is the theme song to The Banana Splits TV show.  One banana, two banana, three banana, four, with a banana...  It doesn't quite work.
Posted by MrVampire at 4:14 AM