As I discovered on a blog about sharks, there is a remarkable similarity between a sharks brain and a female human uterus.  These similarities obviously transcend the coincidental and go a long way towards explaining a few things. 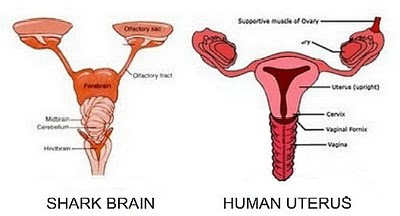 With a sharks brain for a uterus there should be no surprise that when the biological clock is ticking at it’s fullest, women often turn into savage man-hunters whose eyes role back into their head whey they engulf their prey.  But I didn't need to tell you that.

Having a womb for a brain it's no wonder sharks are periodically moody and prefer to see a gynaecologist rather than a psychologist for their emotional upset.


The uterus like brains of sharks have allowed them to figure out parthenogenetic reproduction. This type of reproduction occurs when an egg cell is triggered to develop as an embryo without the addition of any genetic material from a male sperm cell.  Read more about that here: Captive shark virgin birth, BBC News.