I've recently been made aware of a restaurant chain called Kung Fu or Zhen Gongfu (Real Kung-fu) in Chinese.  With Bruce Lee in Game of Death attire as its mascot, which absolutely kicks the McDonald clowns ass.  You can picture that epic fight with Bruce Lee winding up with a clown shoe print on his chest.  I first found out about this food chain from a blog called Daves Long Box.  That’s where I pinched the photos from (thanks Dave).  I've done a little investigating about the franchise since then. 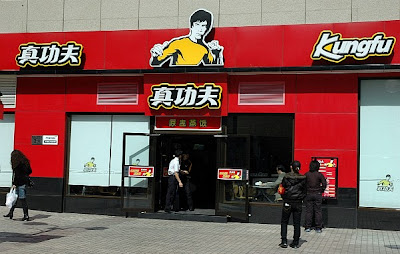 The Kung Fu fast food chain was started around eleven years ago by a 22-year-old and now there are almost 300 locations around China.  Kung Fu is by far the cleanest, most efficient, and best-designed fast food chain to be found on mainland China.  Offering great priced, healthy Chinese meals and with their kung fu speed they proudly deliver all orders in under 60 seconds.  Despite their popularity and having a bilingual menu as standard, they are still relatively unknown to most foreigners. 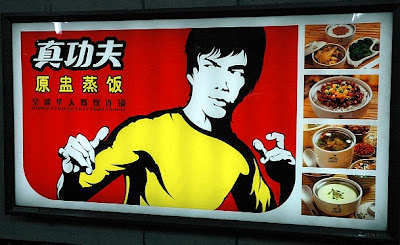 I will definitely be on the lookout for a Kung Fus next time I travel. Hopefully they will keep expanding, I would really love to see this food chain here in Australia and considering the popularity of noodle bars, I think it would do well.  But will they pipe Regurgitators “Kong Foo Sing” over the muzak speakers?
Here's there companys webpage: Kung Fu.
Posted by MrVampire at 5:08 AM