Harry and the Bikini Bandits by Basil Heatter. 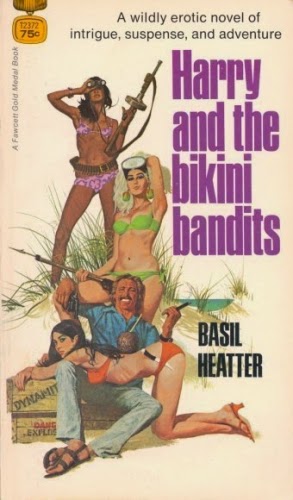 Many years after defeating Voldemort, Harry Potter left England and moved to the Caribbean where he became a local small arms dealer.  After working on his tan, he then attempted to model himself on David Carradine role in his favourite Quentin Tarantino film, Kill Bill. Using the powers of his magical throbbing wand, Harry attracted a trio of kick arse, action women to complete his outfit.  Sadly, Potter never truly achieved anything but local notoriety on his tiny island due to developing an addiction to coconut cocktails, eventually losing his fortune and becoming a homeless alcoholic that slept in the park and made outrageous claims to strangers about being a wizard.
Posted by MrVampire at 7:37 AM