Journey To The West in Space and Time

It's Chinese new year.  Being so this months book cover is a questionable comic book interpretation of the famous Journey To The West story: Adventure of Karate Pig, Ninja Flounder & The 4-D Monkey. 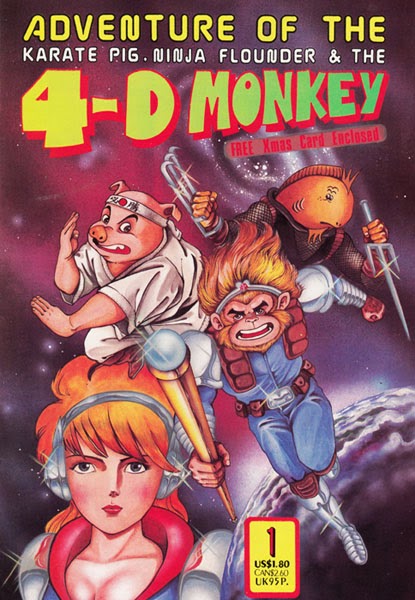 This Hong Kong comic, printed in English, features the monkey king travelling around the universe on dubiously connected quests.  It's the year 2988 and the all new four-dimensional (?) monkey king called Sun is created, not from a stone egg, but in a laboratory.  Likewise are his companions, no not Pigsy and Sandy, but Piggy the Karate Pig and Fishy the Ninja Flounder.  It goes without saying that the heavenly armies and demons that Monkey battles are space aliens.  But I said it anyway.

Piggy is drawn with a Hitler moustache.
Posted by MrVampire at 1:34 AM