We're building daleks!
Researcher Kevin Warwick, a former cyborg, from the University of Reading, has been working on creating organic neural networks that can control machines.  He and his team have taken cultured brain cells from rats and used them as the guidance control circuit for simple wheeled robots. 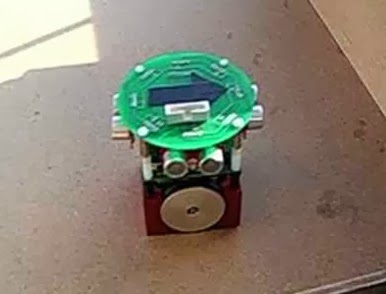 Electrical impulses from the robot (or travel machine) part of the rat-dalek enter the cluster of neurons, and responses from the brain cells are turned into commands for the device.  The intelligence of these daleks are very basic, the brain cluster control primarily helps the robot to avoid walls.  Where it gets really interesting is that the cells can form new connections and this obstacle avoidance often shows clear improvement over time, demonstrating true learning ability on the part of the dalek. 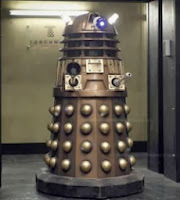 Current cultures of neurons have about 100,000 cells, but only a small fraction are actually involved in controlling the robot circuits at any given time. Research teams continually find new ways to increase the size and response of these cultures, as well as how long they can survive. Eventually, we’ll have a dalek brain that will be able to accomplish much, much more.  Perhaps we are just a shrill voice synthesis and a death ray away from a true tantrum throwing salt and pepper shaker seeing our extermination.
"Primitive but undeniably a dalek" - Tom Baker as Dr Who, Genesis of the Daleks.
﻿
Posted by MrVampire at 1:51 AM