The origins of the Little Red Riding Hood story can be traced to various versions across Europe, however, It may have even earlier origins in the Chinese tale "Grandaunt Tiger".  In the 10th century it was being told by French peasants, and by Italian peasants in 14th century. A common title was "La finta nonna" (The False Grandmother). It has also been known as "The Story of Grandmother".
These early variations of the tale are often nothing like the happy disneyfied tripe most of us know today, the antagonist is often a "bzou" (werewolf) or sometimes even an ogre. The tale is relevant to the werewolf-trials of the time (similar to the later witch trials)

and has notable sexual references, not the least of which is the rampant, horny, wild dog.  Sometimes in these versions there's no "red hood" and they usually feature the wolf leaving the grandmother’s blood and meat for the girl to eat and drink.  Little Red unwittingly cannibalises her own grandmother before Wolfie asks her to remove her clothes and throw them in the fire.  In some versions, the wolf eats the girl after the implied sex, and the story ends there.  In other versions, she escapes by saying that she needs to poo and does not want to do it in the bed so Wolfie lets her go outside.

The earliest known printed version "Le Petit Chaperon Rouge" (Little Red Riding Hood), was written in the 17th century for the French court of King Louis XIV.  The story describes its subject as an "attractive, well-bred young lady".  The village girl is deceived into telling the wolf how to find her grandmother's house.  Wolfie eats the old woman, then waits for Red.  There's the whole get undressed and into bed thing before he eats her and there is no happy ending.  Except maybe for Wolfie.
In the 19th century advances in printing methods led to the rise of the children's book industry, and Victorian editors continued altering fairy tales to make them suitable for younger and younger children wherein the woodsman hero saving the day was added.  Later again, particularly in American versions, the Grandmother hides from the wolf in the cupboard.  All versions, modern and old, make the contrast between the safety of the village and the dangers of the forest and have a stranger danger theme, sometimes mixed with a coming of age theme too.  The origin of the cloaks red colour is usually taken as a menstrual blood symbol. 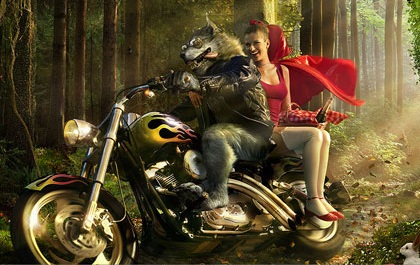 "All right, but don't stay long."
The bzou tied a woollen thread to her foot and let her go out, and when the girl was outside she tied the end of the string to a big plum tree in the yard. The bzou got impatient and said:
"Are you making cables?" (defecating)
When he became aware that no one answered him, he jumped out of bed and saw that the little girl had escaped. He followed her, but her arrived at her house just at the moment she was safely inside.
Posted by MrVampire at 3:06 AM