"Fifty years hence, we shall escape the absurdity of growing a whole chicken in order to eat the breast or wing, by growing these parts separately under a suitable medium."
- Winston Churchill (in 1936)

In vitro meat, also known as cultured meat, cruelty-free meat, test tube meat, tubesteak, or shmeat, is an animal flesh product that has never been part of a complete, living animal. Alternative names include hydroponic meat, vat-grown meat, victimless meat, vitro meat and Frankenmeat. Though it should not be confused with imitation meat, which is a vegetarian food product produced from vegetable proteins like as soy or gluten. 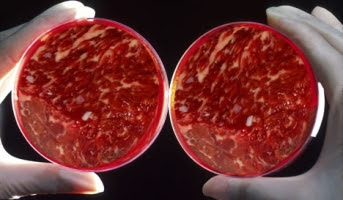 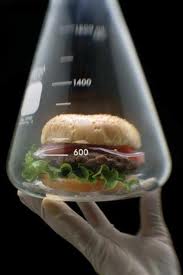 As early as 2000, researchers from the Tissue Culture & Art Project located at the University of Western Australia in Perth began research into in vitro meat. NASA has been conducting experiments since 2001, producing in vitro meat from turkey cells. In 2005, NASA conducted cultured meat research for space food. The first edible form was produced by the NSR/Touro Applied BioScience Research Consortium in 2002: goldfish cells grown to resemble fish fillets.  As early as 2008, some scientists claimed that the technology was ready for commercial use and simply needed corporate backing.  In November 2009, scientists from the Netherlands announced they had managed to grow meat in the laboratory using the cells from a live pig.  In February 2012, scientists at Maastricht University announced plans to produce sausage by March. 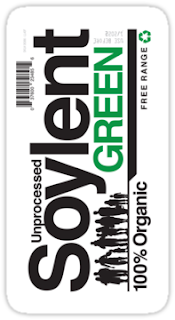 Over 30 laboratories across the world are working on cruelty-free meat, although none has yet been produced for public consumption.  The technology is simultaneously being developed along with human medical uses and an identical process is being researched to develope cultured leather products.  Most meat is animal muscle. The process of developing vitro meat involves taking muscle cells and applying a protein that helps the cells to grow into large portions of meat.  In the process, a matrix of collagen is seeded with muscle cells, which are then bathed in a nutritious solution and induced to divide.  Once the initial cells have been obtained, additional animals would not be needed, much like yogurt cultures.  Assuming that the proper materials are used and conditions remain ideal, two months of vat-grown meat production could deliver up to 50,000 tons of meat from ten pork muscle cells. Theoretically, one animal could provide more than a billion pounds of in vitro meat to feed the world's population for several hundred years. 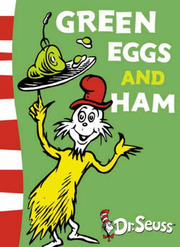 Because this Frankenmeat has yet to be placed on the market, the health risks have not yet been fully investigated.  The aim is to produce healthier meat than conventional meat, most notably by reducing its fat content and controlling nutrients. Researchers have suggested that omega-3 fatty acids could be added, and as a bonus there will be no choking on chicken bones. Hydroponic meat does not necessarily involve genetic engineering, in fact, the cells involved are natural cells which would grow in the normal method.  An issue of Time magazine has suggested that the in vitro process may also decrease exposure of the meat to bacteria and disease. 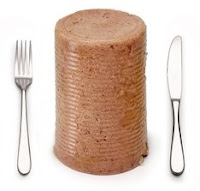 Due to the strictly controlled and predictable environments of shmeat farming, it is predicted that there will be reduced exposure to dangerous chemicals like pesticides and fungicides, severe injuries, and wildlife.  A study by researchers at Oxford and the University of Amsterdam found that in vitro meat was "potentially ... much more efficient and environmentally-friendly", generating only 4% greenhouse gas emissions, reducing the energy needs of meat generation by up to 45%, and requiring only 2% of the land that the global meat/livestock industry does.
Tube meat will initially invade the market in Spam cans, sausages, and frozen burgers.  Presently it's a little expensive for the average consumer, in May 2013 one burger patty was produced for around $325,000, but it is anticipated that the cost will reduce to compete with conventional meat as technologies and it's mass production evolves.  Vat-grown meat can be fashioned from any creature, not just farm animals, even endangered animals like the leather-back sea turtle, or the Sumatran rhinoceros. The future holds that no creature will be off the menu, no matter how rare or exotic.  In fact some scientists believe we will be able to create test tube meat using the DNA of extinct beasts and dine on Jurassic burgers. 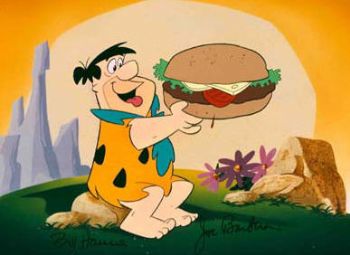 Posted by MrVampire at 2:52 AM