Haven't posted anything arty for a while so here's some microscopic artwork, by Willard Wigan, I was looking at not long ago.  They're pretty damn impressive work if you ask me.

Willard started making small sculptures a little over 50 years ago when he was 5.  Having dyslexia and other learning disabilities, he was teased in school when he was young and he turned to his art for solace.  These days the majority of Willards sculptures are usually displayed inside the eye of a needle or literally on the head of a pin. 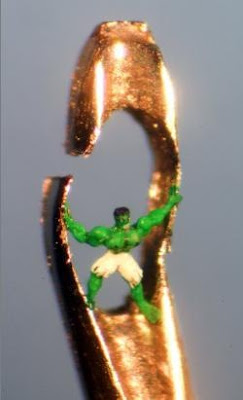 They are so small that Willard has to go into a meditative state to slow his heartbeat, and he works between each pulse when his hand is completely still and steady. His artwork is of such minute proportions that it virtually can not be seen with the naked eye, and can only be seen clearly with a microscope.  Each piece is sculpted with grains of sand, dust fibers, cobwebs or even insect hair. Willards creations are so light eacho one can be lifted with an eyelash.
The average price for each of his micro-sculptures is around $80,000.  Prince Charles Elton John and Mike Tyson are some of the people who collect his work.  Once while he was working on an Alice in Wonderland micro-sculpure, his phone rang. When he answered the phone he sighed and he accidentally inhaled Alice. 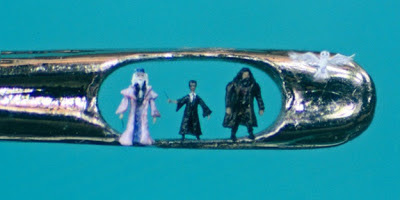 Presently Willard is collaborating with two of the worlds finest watch makers, Robert Greubel and Stephen Forsey (www.timeartgallerygf.com), on a project to create the world’s most exclusive timepiece, Art Piece 1 is scheduled to be unveiled soon at the World International Watch Convention in January 2013.

As it is easier for a rich man to enter a camel than for a poor man to pass a needle, you can see more of Willard and his micro-sculptures at www.willard-wigan.com.

Posted by MrVampire at 4:02 PM