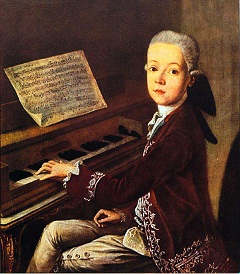 Mozart was absoloutely the first music super star.  If you can't appreciate his music, you really don't know music at all.  Sure there were other other famous composers but for super star status they really didn't compare.  It's sort of like comparing the guy who writes the opening title music for sitcoms to Elvis Presley.  Even Beethoven composed his own early works in the shadow of Mozarts talent.  Over his lifetime Mozart composed over 600 works, many acknowledged as pinnacles of symphonic, concertante, chamber, operatic, and choral music.  Born as Johannes Chrysostomus Wolfgangus Theophilus Mozart in 1756, but like most rock stars, he preferred to be known publicly as Wolfgang Amadeus Mozart.
When Mozart was three he would watch his seven year old sister, Nannerl, during her keyboard lessons with her father.  When he was four his father began to teach him a few minuets and pieces at the keyboard.  He could play faultlessly and with perfect timing.   At the age of five, he was already composing small pieces, which he played to his father who wrote them down.  In 1762, at the age of six, Mozart and his sister began his first concert tour across Europe which spanned three and a half years.  During this trip, Mozart met a great number of musicians and acquainted himself with the works of many other composers. A particularly important influence was Johann Bach.

Mozart was a big fan of excrement and had a fondness for scatological humour and poetry.  Something which is preserved in his letters, notably those written to his cousin Maria, but also in his correspondence with his sister and parents.  According to some research an estimate of 39 of Mozart's letters include scatological passages.  The majority of these are written to family members who occasionally included similar scatological humour in their own letters.  No doubt that if Mozart was alive today The Human Centipede would be pride of place in his DVD collection.

One of the surviving letters to his cousin Maria contains a fine example of Mozart's use of scatology: "Well, I wish you good night But first shit into your bed and make it burst. Sleep soundly, my love Into your mouth your arse you'll shove."  The German original is in rhyming verse.

Mozart even wrote scatological music, a series of canons that he sang with his friends:
"Leck mich im Arsch" (Lick me in the arse)
"Gehn wir im Prater, gehn wir in d' Hetz," (Off to the Prater, off to the Fun)
“Difficile lectu mihi mars et jonicu” (Difficult thing for me is reading Mars and Ionian)
"O du eselhafter Peierl" (Oh, you asinine Peierl)
"Bona nox" (Good night) 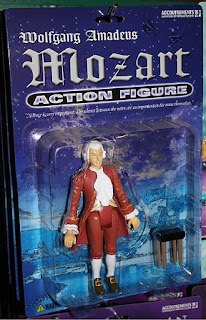 An unusual phenomena occurs when listening to Mozart called, not surprisingly, The Mozart effect.  Mozart's music induces a short-term improvement on the performance of certain kinds of mental tasks known as spatial-temporal reasoning. If you look around, you will quickly realise that the opposite occurs when listening to Justin Bieber.
Researchers Shaw and Ky, investigated the effect of listening to music by Mozart on spatial reasoning.  They gave research participants one of three standard tests of abstract spatial reasoning after they had experienced each of three listening conditions: a sonata by Mozart, repetitive relaxation music, and silence.  They found a temporary enhancement of spatial-temporal reasoning, as measured by the Stanford-Binet IQ test.  What this shows is "that there are patterns of neurons that fire in sequences, and that there appear to be pre-existing sites in the brain that respond to specific frequencies."  Unfortunately, the research also showed that the enhancing effect of the music condition is only temporary, no student had effects extending beyond a 15-minute period.
So there you have it, listening to music about poo can benefit your brain.  Try it out yourself, here’s Leck mich im Arsch (Lick me in the arse).
I'm waiting for the karaoke version to come out.

Posted by MrVampire at 3:04 AM