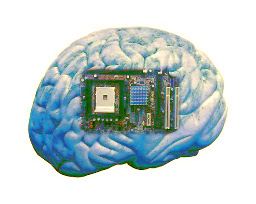 Can't solve that difficult engineering problem? Wish you could draw better? Need to think outside the box? Evil plans not planned so well? Or still haven't learnt to ride without training wheels?
Imagine that with the simple press of a button you could control the operation of your brain to increase the speed, capacity for problem solving or even creativity its self. Imagine if you could achieve this without surgically implanting circuit boards and optical fibre into your skull.
Well you can with magnets! 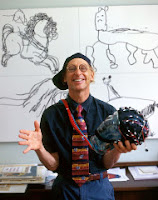 Using transcranial magnetic stimulation (or TMS), Australian researcher Dr. Allan Snyder tested his hypothesis that some savant and creativity abilities occur because the left hemisphere suppresses and confines the raw impressions of the right hemisphere. Using TMS to suppress the left anterior temporal lobe, Snyder found that subjects become better at drawing, better at estimating the number of dots on a screen, and better at recognising word duplications in proofreading.  Basically he uses magnets to create temporary brain damage and makes people better for it.
Allan Snyder, aside from having a bad sense of fashion, is the director of the Centre for the Mind at the University of Sydney, Australia. You can find out more about his research at: The Centre for The Mind dot com. 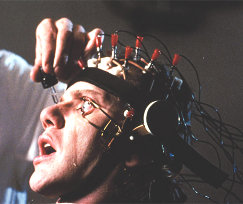 Further studies, at the University of Gottingen in Germany, have shown participants given transcranial magnetic stimulation indicate an improvement of around ten percent in learning of motor skills and were three times more likely to solve a difficult, unfamiliar problem than those in a control group. Also some not so top secret investigations into transcranial magnetic stimulation funded by the US military, have lead to plans of flight helmets with a built in devices for the improving of pilot performance with the flick of a switch. 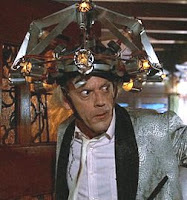 Now you can't just go sticking fridge magnets on your head. You'll look like an idiot and they don't have the magnetic field strength to mess up your brain. What you're going to need is an 70mm electromagnetic butter?y coil with opposing currents in each coil loop, creating a focal magnetic field below the intersection of both coils. The magnetic field intensity should be approximately 2 tesla on the coil surface which will roughly translate to around 0.5 tesla in the brain.  Stimulation is applied for approximately 15 minutes at 1 pulse per second and focused the left anterior temporal lobe area of the brain. If that sounds hard to make, try masquerading as a neurosurgeon, you can just go buy a pre-made one. It's a MagPro magnetic stimulator by Medtronic.
Once you've got your super magnet, you're ready to give yourself the creativity upgrade you’ve been waiting for. Just strap that baby on your head and plug in those kilowatts.

Posted by MrVampire at 4:20 PM