As shown in this vintage comic, it turns out Jane Russell was the original fembot, significantly predating other depictions of fembots. 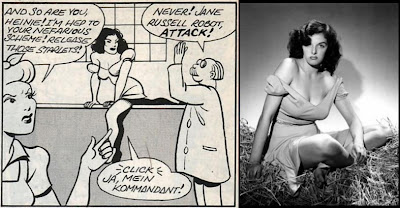 That's what's missing in todays movie promotions, honesty in advertising.
One of her movies should have been called "Gentlemen Prefer Bots".

Here's a link to an interview with a Journalist and a robot head that's had a real persons thoughts and memories uploaded, creating a very vague and confused artificial intelligence. It longs for a real life so it can go outside and do gardening or conspire to takeover the planet.
BINA48
Not quite the fembot that the well known Japanese Actroid is, but what do you expect from a non-profit organisation.
Posted by MrVampire at 12:36 PM