This year not a Christmas book but a book titled Buddhism by , oddly, a man called Christmas Humphreys. 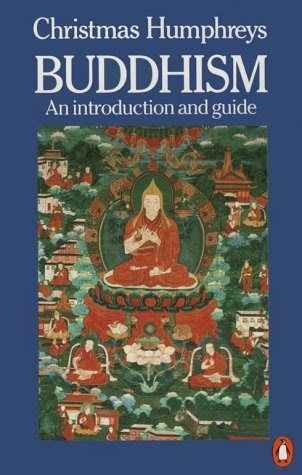 Christmas Humphreys was a British barrister who prosecuted several controversial cases in the 1940s and 1950s, and later became a judge at the Central Criminal Court, more commonly known as "the Old Bailey".  He wrote a numerous works on Buddhism and founded what became the London Buddhist Society in 1924. His former home in St John's Wood, London, is now a Buddhist temple.  Humphreys was also president of the Shakespeare Fellowship, a position to which he was elected in 1955. The Fellowship advanced the theory that the plays generally attributed to Shakespeare were in fact the work of Edward de Vere, 17th Earl of Oxford.
"Christmas Humphreys was on the bench. Nice fellow, you must know him – a little bloke, wears a wig, you can see the join if you look closely." - Tony Hancock.

Posted by MrVampire at 8:35 AM