A special double Christmas edition of the monthly book cover, Book One and Two of The Santa Claus Chronicles by Robert Devereaux.  Santa Steps Out and Santa Claus Conquers The Homophobes. On the cover of Santa Steps Out, Santa is "stepping out" with a fiery redheaded woman in the embers of her fireplace. It is a well documented fact that Santa (much like Satan) is quite fire resistant. The same can not be said for the smouldering redhead who is already showing signs of burning and may well burst into flames at any moment. 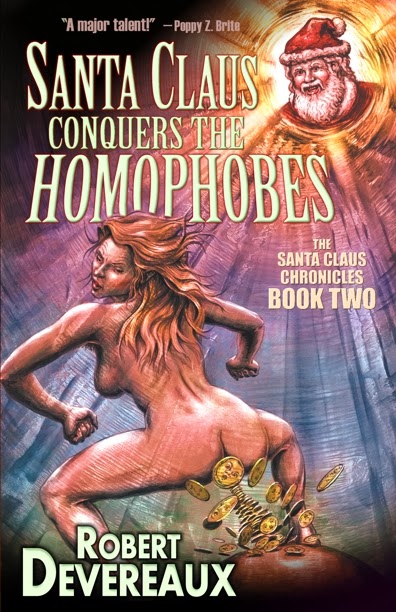 ﻿
The cover of Santa Claus Conquers The Homophobes depicts yet another naked redheaded woman who has the power of financial defecation.  Not necessarily the greatest power to possess, but probably not the worst, especially in difficult economic times.  Red relieves herself on the belly of a pregnant woman as Santa watches proudly. This may be the same redheaded woman he "stepped out with" in the previous book and imbibed her with his magical spirit of charity and giving. Which would go a long way towards explaining why she can poo gold coins.  Hopefully they are gold coins and not those foil wrapped chocolate ones popular at Christmas time, especially considering their place of manufacture.

Posted by MrVampire at 1:05 AM