Oddly Christmas cards originated long before they could be printed and, even more oddly, before the tradition of Christmas. In pre-Christian Europe it was common to send good luck gifts for new years.  In Rome at the time, theses gifts were often accompanied with written cards. The cards were often sent on December 25th to ensure they arrived by January 1st.  When Christianity took over in Rome the tradition continued, though these cards still did not make mention of Christmas. The card tradition eventually migrated through Europe and to England, where these home made cards combined well wishes for both Christmas and the New Year and were delivered before Christmas Day.


Later in the fourteenth century with the advent of wood-block printing, small scale mass production of New Year's cards appeared in Germany. By the fifteenth century, religious Germans were creating New Year gifts called 'Andachtsbilder'. These cards still focused on the new year but were often decorated with a picture of the baby Jesus.  The lithograph was invented at the end of the 1700s and further promoted the printing of Christmas themed holiday greeting cards across Europe, but the final leap of the Christmas card was tied to the scocial etiquette of the early 1800s.

During the 1800's the practice of visiting one’s friends and relatives was a middle and upper class social convention with it's own etiquette revolving around the calling card.  Every well to do gentleman kept a ready supply of calling cards with him to distribute upon his visits.  A married man had a medium sized card, while an unmarried man had a smaller card. Men’s cards were always smaller than women’s.
On a first visit to a household a servant was often sent to deliver a calling card as it was not expected to be invited in.  A gentleman would give one card to each lady of the house.  If the lady of the house was not home, but her daughter was, the gentleman sent in his card and departed as a young lady did not receive calls from a gentleman unless they were very intimate friends.

When calling upon a friend, a gentleman gave his card to the servant answering the door. The servant would be holding a silver tray and the card would be placed upon it. If the person the gentleman was calling upon was home, the servant would take the card to them and they would come meet the gentleman. If the person being called upon was not home, the servant would leave the card for when they returned.
If a card was left with a folded top right corner it indicated that the card had been left in person rather than by a servant, and often other corners were folded down to signify the nature of the visit. For a congratulatory visit, the left hand upper corner was turned down, the left hand lower corner for a condolence visit, the right hand lower corner if you were visiting before a long trip. Alternatively a gentleman would inscribe initials upon the card, which stood for French words, to denote the reason for his visit. 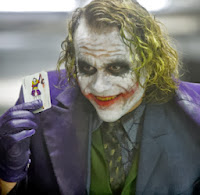 Congratulations: p. f. (pour féliciter)
Expressing thanks: p. r. (pour remercier)
Condolences: p. c. (pour condoléance)
Happy New Year: p. f. N. A. (pour feliciter Nouvel An)
Taking leave: p. p. c. (pour prendre congé)
Introducing ones self: p. p. (pour présenter)
Visiting cards became an indispensable social tool, with rules governing their use, much more elaborate and sophisticated than clicking like on facebook. During Christmas and New Year it was common for the person you were calling on to be out visiting also so it became a seasonal exchange of cards. 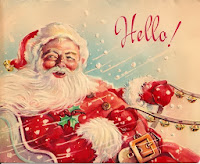 The growing use of decorated printed stationary and the gradual development of New Year specific calling cards prompted Sir Henry Cole and his  friend Calcott Horsley to create the first official "Christmas" Christmas card for the masses in 1843 to take advantage of the new Public Post Office.  Selling for 1 shilling, the card had three panels. The outer two panels showed people caring for the poor and in the centre panel was a family having a large Christmas dinner in which a child was being given a glass of wine.

As printing methods improved, Christmas cards became more decorative and more popular and were produced in large numbers from about 1860.  In 1915, John C. Hall and two of his brothers created Hallmark Cards, still one of the biggest card makers today. In the 1920s a trend back towards home made cards became popular, often made with foil and ribbon on them. Today, cards have all sorts of pictures on them: nativity scenes, Christmas trees, rude reindeer, naked Santa Claus etc. With the advent of cheaper photo-printing a disturbing trend in custom cards has arisen in the form of individuals and families taking Christmas themed photographs of themselves (or their pets) and producing them on mass as cards. 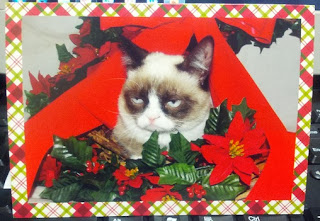 These days, Christmas cards make up approximately 45% of all greeting cards sent and, despite historically being a gentleman's social tool, only around 15% of those Christmas cards are purchased by men.
Posted by MrVampire at 2:42 AM