Neil Young and the Jawas 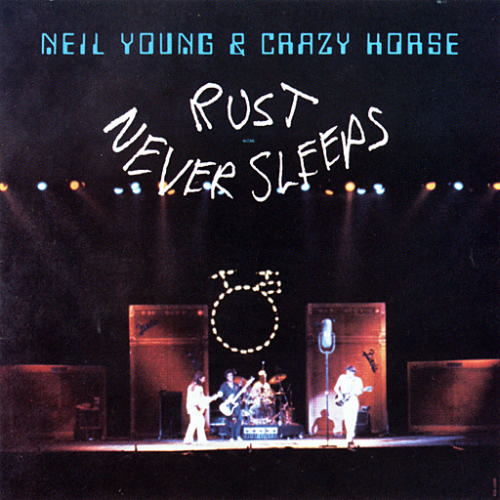 An unremarkable album cover for one of the most pivotal albums in music.  This month it's not the picture on LP cover that draws my attention but the album title and story behind it.  Rust Never Sleeps earned Neil Young a new generation of fans, it renewed his standing as a musician and the album became the influence of many future grunge bands such as Sonic Youth, Pearl Jam, Nirvana and Powderfinger to name a few. 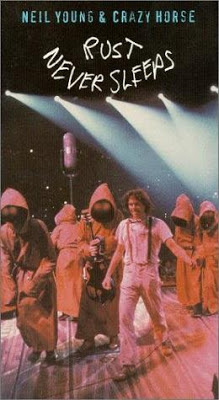 Upon its release, Rust Never Sleeps was hailed as a commercial and critical revitalisation for Neil Young, and the successful, bizarre tour featuring oversized amps, roadies dressed as Jawas from the then new Star Wars film (called Road-eyes by Neil), sound technicians in lab coats, audio recordings from Woodstock played from disintegrating tapes:
As the house lights were extinguished, Jawas from Star Wars swarmed the stage, moving equipment into position as Coneheads took their places at the mixing boards on stage. The feeble house public address system blared out Jimi Hendrix's guitar version of the U.S. national anthem while three Jawas dragged a ten-foot tall cardboard replica of a 1926 Electrovoice microphone to centre stage, struggling to right it “Iwo Jima” style. Hendrix's "Anthem" suddenly swirled into the Beatles' "A Day In The Life." The large blue instrument case up stage left was lifted to reveal a prone human figure in foetal position clutching a Guild 12-string. The figure rose and broke into the song "Sugar Mountain"... 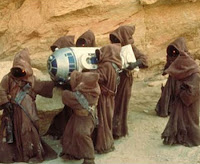 Neil also released a film version of the album under the same title. Later on in 1979, Neil Young and Crazy Horse released the album Live Rust, a compilation of older classics interweaving within the Rust Never Sleeps track list.  My Dad actually had, and still has, an original Rust Never Sleeps poster from the album tour. I remember looking at the poster when I was a kid wondering why there were Jawas on the stage with the band.   The thing to keep in mind about the Jawas in Star Wars is that they are scrap dealers, so they were symbols for the tour and LP.  Neil has confirmed that he got the phrase "Rust Never Sleeps" from Mark Mothersbaugh of the band Devo, the title is borrowed from the slogan for Rust-Oleum paint (a rust inhibitor) and is also an aphorism describing Neil Youngs musical self-renewal to avert the threat of irrelevance.  The Jawas are a representation of that idea.
Not so surprisingly, George Lucas threatened legal action at the unlicensed use of his characters, however, this was settled amicably out of court with little fuss.  Suspiciously though, a few years later in 1982, a story appeared in The Empire Strikes Back Monthly comic (issue156 by Marvel UK) about scrap yard droids and Jawas which had the title "Rust Never Sleeps", giving a subtle nod towards Neils music album. 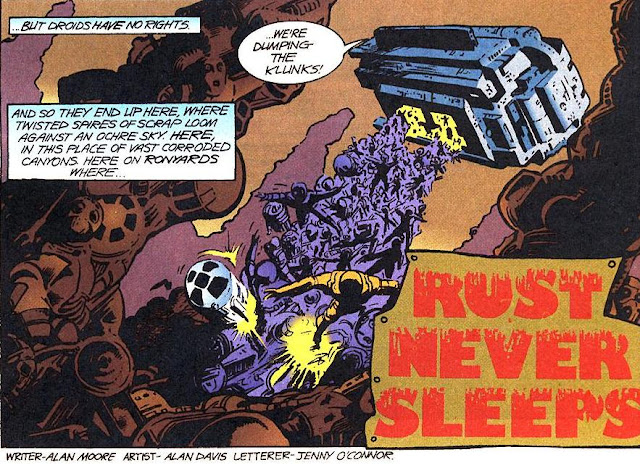 Posted by MrVampire at 3:43 AM