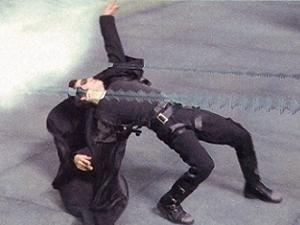 In theory any moving object can be avoided given the right time frame.  Now assuming we don't have super speed, what's the minimum distance needed to successfully dodge a bullet?  We're also going to assume we move the right way not the wrong way on reflex.
Here's the maths:
Average human reaction time is 0.19 of a second, for visual stimulus.  So yeah, with this theory you have to actually see the gun fire.
Activation of muscle fibre averages at 0.008333 of a second for humans, so the total reflex time is of 0.198333 of a second.  Let's round that up to a tidy 0.2 of a second.
The bullet speed of a 9mm pistol is 340m/s.  .2 of 340m gives a 68m minimum distance to dodge a 9mm pistol bullet.
Alternatively, given that distance and pistol accuracy, you may be better of just standing sideways, sucking in your gut and hoping for the best.