The Dark Side of the Rainbow 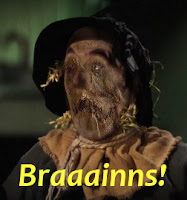 The Wizard of Oz:  A girl named Dorothy is transported to a magical land where she kills the first person she encounters.  She teams up with three other outcasts to kill again.  The court case would be: Exhibit A, one farmhouse.  Exhibit B, one bucket of water....  Dorothys' gang consisted of:  a heartless, ax-wielding android;  A deceitful, bipedal, sentient lion; a mentally unsound, rag-faced, shambling horror; and Dorothy herself, a foreigner intent on impressing her beliefs through violence on the local communities. 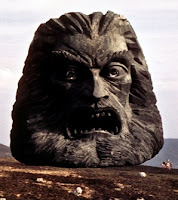 Then there's Glinda the Narcissistic Witch of the North. She floats in near the beginning of the adventure all smiles, and magic superpowers and insisting on wearing a crown.  But one wonders where was she during all the bad stuff?  Was she floating around in the clouds watching the whole series of unfortunate events? Dorothy had the slippers to take her home form the beginning, did Glinda make her go through all that trouble for her own amusement?  Or was she just to inconsiderate to bother telling her anything useful about them right away?
Glinda is not quite the good witch she paints herself to be, at best she's self-involved and inconsiderate of others. At worst she's a sadist who enjoys watching others suffering until she decides to come in and save the day, so she can bask in their adoration. 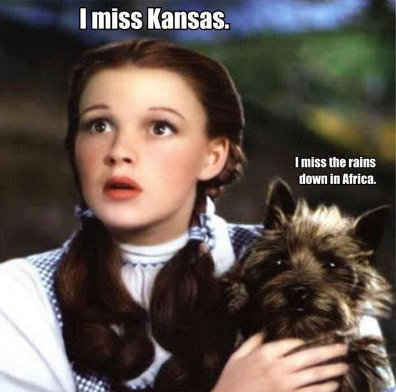 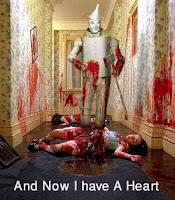 One of the legends of The Wizard of Oz film is that one of the munchkins hanged himself on the set and his body can bee seen  at the end of the scene where the Tin man joins Dorothy and the Scarecrow.  Other versions of this story involve a stage hand or the daughter of one of the producers.  The other side of the story is that many exotic birds were borrowed from the LA zoo for filming and were everywhere throughout the set causing unexpected background movements.

There's various footage all over you tube (including some faked dead munchkin footage), the most recent addition to the story is that the DVD has had the munchkin digitally edited and replaced with a bird so only the VHS version from the mid 80's has the dead munchkin in it, making it all a big cover up by the studio.
The thing here is, that as much as I would like there to be a dead munchkin swaying back and forth while Judy Garland and her companions sing and dance by, I actually remember seeing the bird when I watched it as a kid.  It seems crazy but at times I seem to have a disturbingly good long term memory.  The Wizard of OZ was on every year when I was young, my school music teachers would tell us to watch it and I remember the bird spreading its wings. I think we're talking 1979, 1980 and 1981 here, which pre-dates the distribution of the movie on VHS where all the brujha began. 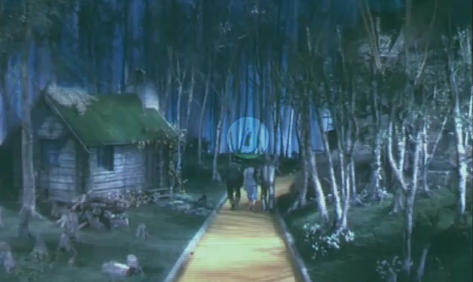 One of the things that keeps this story circulating (aside from some people believing absolutely anything) is that many workers were losing their jobs at the studio at that time, and there was a make-up artist who committed suicide and is believed to have worked on the film. But  this was not in the middle of the studio and was after the close of production. 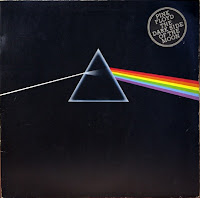 Aside form any pendulums made of dead munchkins, if you really feel like a head spin, try playing Pink Floyd’s Dark Side of the Moon album with the movie and seeing how the songs seem to match up with the scenes.   It really works, it gives the whole thing a very unsettling vibe.  Despite the rainbow on the cover of the album, various members of Pink Floyd have denied that they wrote the album while watching The Wizard of Oz or that they were inspired by the movie at all. But eerily it does match up...  Here's the how to: start the album at the third lion’s roar in the MGM movie title right before the film starts. Alternatively if you don’t want to try it old school yourself at home, here’s the you tube version. You'll be surprised at how suspiciously the songs match up with what's happening in the coinciding scene. Go on try it.
At risk of being a spoil sport, here's what is actually happening: your brain is designed to seek associations between various stimulus, so you automatically hone in on, and identify, any coincidental similarities between the music and the visual.  It just so happens that The Dark Side of the Moon and The Wizard of Oz have an extraordinary number of these coinciding similarities.
Posted by MrVampire at 3:10 AM