I recently had some trouble with my Platinum card which says it comes with a VIP help line.  The "VIP" is a lie.  But let's see how deep the rabbit hole goes...

When a company outsources it's help desk, it usually means that an Indian from thousands of miles away will be on the telephone if you have problems with your credit card or need tech support for your new software.  Unknown to the mass consumers is that India is known by the business globe as "the world's back office", employing around half a million people in the outsourcing industry.  The average Indian call centre houses around 1500 graduates technology courses.  All packed in there like refugees on a boat that never exits the country.  Most of them are in their early 20's ...and all trained further in the art of cultural subterfuge. 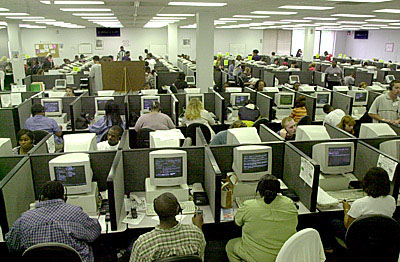 In hundreds of classrooms across India, instructors from Australia, England and the US have set up courses which serve to neutralise an Indian's accent when speaking on the phone. Weeks of accent-neutralisation classes incorporate a cornucopia of sneaky tools such as, regional dialects, country specific geography and local cultural activities. These trainers sometimes require their students to learn Shakespeare and examine popular caricatures of Indians like Apu from The Simpsons...  It's all part of the ruse to make the customer service rep seem less foreign.  But the deception doesn't stop there. Reps are given daily updates on local events to sneak into the conversation "Did you watch the game last night? I expect you're a maroon supporter, I'm from down South so I'm a blues fan."  See it's all sneaky smoke and mirrors to get you on side.

Because of the time difference between India and the customers they service, Indian employees frequently work graveyard shifts or split shifts.  Employees in these centres deal with an average of one hundred phone calls per shift and not all of them happy individuals. This kind of shift work brings with it a host of health problems: digestive disease, hair loss, back pain, menstrual problems and the list goes on and includes an entirely new condition.  An estimated 60,000 Indians have already started to show signs of a condition known as accent stress.  Everyone has faked an accent at some time or another, but imagine trying to fake an accent for eight to ten hours a day.  It's not just a mental drain, it wears out the throat muscles. 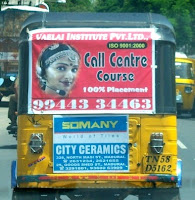 Not surprisingly, the burnout rate is high in Indian call centres, thirty to forty percent of most workers quit within the first year. They are, however, quickly replaced. English speaking young adults in India are clamouring for jobs which can pay over $200 Australian per month.  Imagine that spectacular $50 a week as your pay packet!  Now we can see why my bank thinks outsourcing there is so great.  As it turns out though, India’s call centre success is also becoming it's failing.  As outsourcing continues to grow, fewer and fewer acceptable employees are available. The majority of interviewees are unemployable in call centres due to their English language skills, and if a company is unable to recruit workers at reasonable wages, they lose orders to rival companies sometimes even to overseas in Thailand, China or the Philippines.

So much for VIP Platinum service.  Long story short I got fed up and walked into my local branch, they told me the information the call centre told me was incorrect. Why? Because they are in a completely different country.  VIP service my arse.
Posted by MrVampire at 3:19 AM