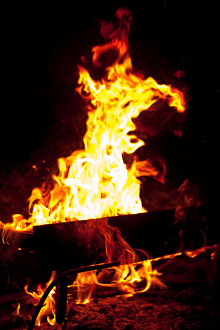 After much research (well ok just a little bit) I have come to the conclusion that fire is alive!
It consumes (and requires) a fuel source to exist and leaves behind waste, it grows, it needs oxygen to breathe, it moves from one place to another, it can make baby fires, and dies. It could be argued that fire is just a bunch of chemical reactions, but I argue back that so are you. At the most basic level, living things like plants and animals are just self-sustaining chemical reactions, same as fire.
There is actually no unilateral agreed upon definition of life, but Generally there are considered to be seven traits something has to have to be considered to be alive. I'd like to point out that certain organisms, already accepted as being alive, don't have all seven of these traits. 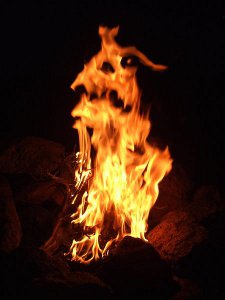 The Seven Traits for Life:
1. Reactivity to the environment. Fires reacts more distinctly to differing environments than many microbes.
2. Ingestion of substance for energy to function. Yep.
3. Reproduction. Like asexual microbes fire can create offspring from its self.
4. Respiration. Fire requires oxygen, without oxygen it dies just like other forms of respiration. Some microbes don't actually respire anyway.
5. Emission of wastes. Yes, waste is produced from the consumption of fuels.
6. Internal Movement. Yes lots.
7. Cellular Structure. No, but neither do viruses which are generally considered to be some form of life.
See, fire is life Jim but not as we know it.  Fire is not so much extraterrestiral and alien life as it is primordial, and elemental.  It's dawn of time ancient. What sort of life is that?  A demon that's what! A fire demon! 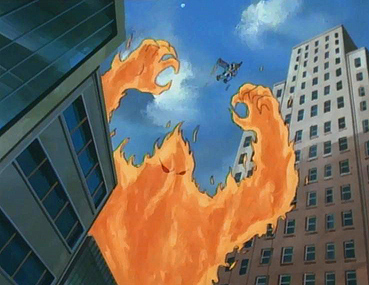 In conclusion: Fire demons are real.