Discovered an unusual incident involving an eel that was reported in The Daily Telegraph a couple of months ago (September 17). 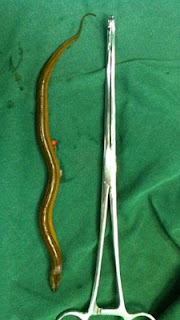 A man in the Hubei province of China was relaxing in a spa bath with live eels to let them feed on his dead skin when one started travelling up his urethra!  He's quoted saying: "I tried to hold it and take it out, but the eel was too slippery to be held and it disappeared up my penis."
After three hours of surgery to remove the 15 centimeter eel from his bladder, it was found dead.  The surgeon who extracted the eel explained: "The diameter of the urethra in a man's penis is just a little narrower. But because eels are quite slippery, its body worked as a lubricant and got into the penis smoothly."
He probably shouldn't have peed in the bath. Reminds me of that line from The Hitchers song: "Eels up inside ya. Finding an entrance where they can."
(I couldn't resist reposting the song)
Here's the link to The Daily Telegraph story.
Posted by MrVampire at 12:23 AM