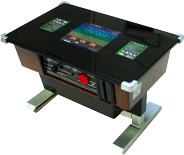 Back in 1978 this amazing machiene appeared at the shopping centre downthe road.  It was one of the first video games and back then was the most wonderous pocket money waster around.  Created by Tomohiro Nishikado, the game caused a temporary shortage of 100-yen coins in Japan. 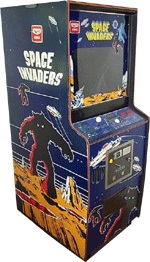 At the time microcomputers in Japan were not powerful enough to perform the complex tasks need so, Nishikado designed his own custom hardware and development tools to create the arcade board circuitry. Despite this, Nishikado was still unable to program the game as he wanted with colour graphics and faster movement.  While programming the game, Nishikado discovered that the processor was able to render the alien graphics faster the fewer were on screen.  Rather than change the programming to compensate for the speed increase, he decided to keep it as a challenging gameplay feature. 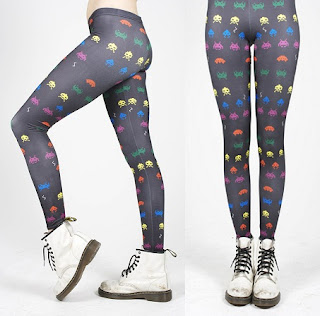 Tomohiro Nishikado drew his inspiration from several sources Star Wars, War of the Worlds, a Japanese mechanical board game and a dream about school children who are waiting for Santa Claus and are attacked by invading aliens.  Originally titled Space Monsters, inspired by a popular song in Japan at the time, but was changed to Space Invaders by Nishikado's superiors prior to release.

Back then in 1978, the game got its colour through plastic film stuck to the screen which would often be peeled off by vandalous youths leaving a monochrome game experience.

Here's a true to the original emulation.  Give it a play!