Today is the Anniversary of the Glenrowan Shootout between the Victorian Police and the Kelly Gang led by Ned Kelly, Australias first Supervillan. 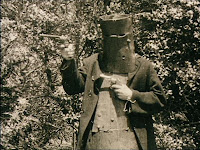 Ned was son of Red Kelly who died in 1866 when Ned was eleven, so he left school to help his mother support the family.  Ned's criminal life started early, his mother would often chastise him yelling "Edward, get that bloody bucket off your head!"  When he was fourteen, he was arrested for allegedly assaulting a Chinese man called Ah Fook. At fifteen he was arrested for being a suspected accomplice of the bushranger Harry Power. Both these charges were dismissed, but police regarded him as a "juvenile bushranger". Eighteen charges were brought against members of Ned's immediate family before he was officially declared an outlaw, half of them resulted in guilty verdicts.
Some years later, in April 1878, an unreliable police officer named Fitzpatrick went to the Kelly home, hoping to arrest Ned's brother Dan for stealing horses. He claimed that while he was there, Ned shot him in the wrist, however, Ned may have been interstate at the time of the incident. Ned's mother Ellen was arrested for aiding and abetting an attempted murder. During this time Ned was constantly irritated by the neighbours son, Nudge, who would drop in unannounced, greet Mr Kelly, then help himself to their pantry. So Ned and Dan went into hiding, and were later joined by Ned's friend Joe Byrne, and Dan's friend Steve Hart. 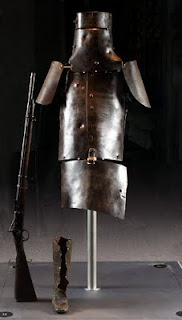 Being of Irish decent, they planned to run a whiskey distillery to earn enough to appeal their mums sentence.  On receiving a tipoff that four policemen were planning to track them down. The gang ambushed the police camp at Stringybark Creek and shot three of the policemen.  From this moment on these four men were officially outlaws: the notorious Kelly gang. In 1879 the Kelly gang began constructing their suits of armour from plough mouldboards, as they were all big enthusiasts of the Steam-punk.

On 9 December 1878 the Kelly gang took possession of a sheep station near Euroa, locking up twenty two hostages in a store-room. While Byrne guarded the captives, the other three went and held up the National Bank. The outlaws then gave an exhibition of horsemanship which entertained and surprised their hostages. After which they had supper, told the hostages not to raise the alarm for another three hours, then left.
On 8 February 1879, the gang struck again, this time at Jerilderie. They locked up two policemen and took possession of the police station and remained there until Monday morning. Wearing police uniforms, they held up the Bank of New South Wales and rounded up sixty people in the Hotel next door. Ned gave a written statement of over eight thousand words to a bank-teller as explanation and justification of his conduct.  He probably felt he had a lot of explaining to do.
A friend of Joe Byrne's, became an agent for the police, and on 27 June 1880, was shot dead by Byrne in his own doorway while the four constables assigned to guard him hid in a bedroom. Byrne and Dan then joined Ned and Hart at Glenrowan, where they took possession of a hotel and detained about sixty people. The Kelly Gang was equipped with their armour, had little sleep and consumed much alcohol. They knew that a passenger train carrying a police detachment was on its way and ordered the rail tracks pulled up in order to cause a derailment, however, police stopped the train before it reached the damaged tracks after being informed by some of the hostages that had been let go. 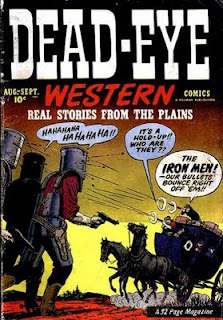 At around 2am Ned and Dan declared it a non-event as the train had not arrived. Just as they told the hostages to go home the police laid siege to the hotel and much shooting occurred.  Dan, Byrne and Hart took refuge inside and Ned went bush. The police continued to fire Byrne was shot in the thigh and bled to death.  About 5am Ned returned, still clad in armour, and was brought down by bullet wounds in the legs. Most of the captives in the hotel had succeeded in leaving the building, the last of them emerging about 10am. With Ned captured and Byrne dead, only Dan and Hart were not accounted for, so the police continued to fire sporadically until 3pm, when a policeman set the building on fire. Dan and Hart had apparently taken poison and were burned beyond recognition.  Or maybe they escaped, it's hard to tell when the evidence has been burned beyond recognition by the police.

The Victorian Police had been told three times by informants of the existence of the armour and that it was capable of deflecting bullets but dismissed the information as "nonsense" and "an impossibility". Despite these warnings none of the police realised the gang were wearing armour until after the siege was over.
Until Ned fell the police even questioned whether he was human. Constable Arthur, who was closest, thought he was a "huge blackfellow wrapped in a blanket", Constable Dowsett exclaimed it was "old Nick" and Senior Constable Kelly called out "Look out, boys, it’s the bunyip. He’s bullet-proof!". Constable Gascoigne, who recognised Ned's voice, told Superintendent Sadlier he had "fired at him point blank and hit him straight in the body. But there is no use firing at Ned Kelly, he can't be hurt".  Although aware of the information supplied by the informant prior to the siege, The Superintendant later wrote that even after Gascoigne's comment "no thought of armour" had occurred to him.  In hind sight, it was probably not a good plan for the Victorian Government to use Keystone Cops for their law enforcement. 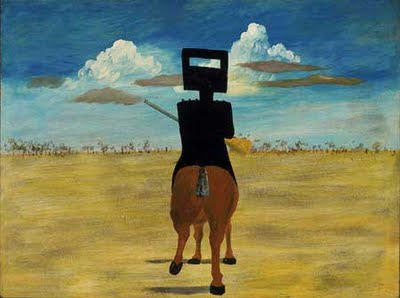 Posted by MrVampire at 6:33 AM