The modern English term Easter developed from the Old English word Eastre or Eostre. The name refers to Eostur-monath, a month of the Germanic calendar named after the Anglo-Saxon pagan goddess Eostre.  The egg was a symbol of the rebirth of the earth in pagan celebrations of spring and was adopted by early Christians as a symbol of the rebirth of man for Easter after they conquered and integrated these pagans.  The rabbit is also a pagan symbol of fertility on account of that they are always at it with each other like the filthy rodents they are. 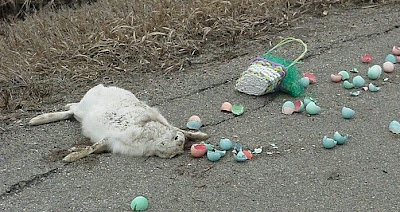 The rabbit bringing eggs has it's origin from Alsace in Southern Germany during the early 17th century.  According to the tradition, children would build brightly coloured nests, often out of caps and bonnets, in secluded areas of their homes. An Easter Hare would lay brightly coloured eggs in the nest if the children had been good.  As the tradition spread, it eventually became the modern egg hunt.  These days the eggs are usually sweet on the outside but hollow on the inside which is probably an accurate analogy of it’s commercialisation. 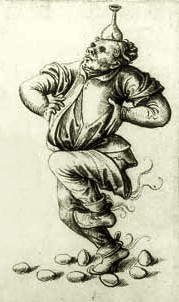 Most people are aware of the traditional egg hunt game some families do, but there are other much more exciting traditional Easter games like the Egg Dance.  In the Egg Dance a number of eggs are laid on the ground or floor and the goal is to dance among them breaking as few as possible.  Occasionally it was done blindfolded for extra party entertainment value, like when one of the uncles slips on the yolk and fractures his spine.  A hopping variation popular in England was called the hop-egg.
Just remember that not everything brown and oval left behind by the Easter rabbit is made of chocolate.
Posted by MrVampire at 6:01 AM