On this day in 1770 Captain Cook discovered Australia. 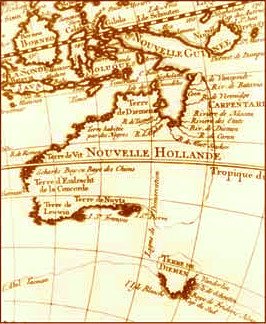 Captain Cook was the first person ever to discoverer Australia and don’t let anyone tell you differently.

The Earl of Sandwich paid for the Resolution and both it's companion ships the Adventure and the Discovery for the Pacific exploration.  If he had funded the Endeavour, it could have been Australia that was named "Sandwich Land".  If this was so, Olympic announcers would have to say stuff like ".. and in lane four is Ian Thorpe representing Sandwich Land".  Australias international marketing potential would be outrageous.

Cook arrived in Hawaii during the season of Lono the god of peace and Fertility.  Upon going ashore Cook was baffled by the great ceremony which greeted him and did not realise that he was being accepted as a Polynesian god. With his poor grasp of local etiquette his crew soon outstayed their welcome. Two days after sailing away from the island, the Resolution sprung its foremast and had to return.  This time the season of Lono had ended and the season of Ku, the god of war, had begun.

Cook did not receive the welcome he expected. 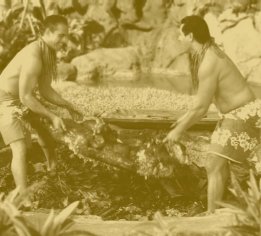 There was stealing of boats and attempted hostage taking, and guns and clubs all over the shop.  Cook was clubbed and stabbed to death on the beach during a not very leisurely stroll.  The local islanders believed that the power of a man was in his bones, so they took Cooks corpse, gutted and cooked Cook, to enable the bones to be easily removed.  Whereon Captain Cooks name became his self fulfilling prophecy.
Posted by MrVampire at 4:44 AM