Ever played the sims?  Mathematical knowledge is unlike any other knowledge, its truths are objective not subjective and independent of human bias. Maths appears to be an underlying level to the universe that determines it's rules and laws. But how and why are we able to access this immaterial level to reality?
One possibility is that we live in a computer simulation based on the laws of mathematics not actually in what we perceive to be the real world.  According to this theory, some highly advanced computer programmer has devised this simulation, and we are unknowingly part of it. Thus when we discover a mathematical truth, we simply discover aspects of the code being used.
As strange as it may sound, we may in fact be more likely to be in such a simulation than not. If such complex simulations are possible, then eventually people will create them and presumably many of them. If this is so, in time there will be many more simulated worlds than non-simulated ones, so statistically we are more likely to be living in a simulated world than the real one.
Are we ready to take the red pill and see how deep the rabbit hole goes? 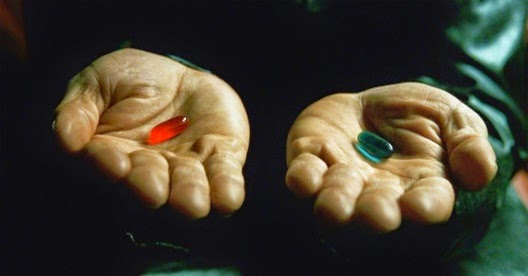 In a recent paper, Constraints on the Universe as a Numerical Simulation, the physicists Silas R. Beane, Zohreh Davoudi and Martin J. Savage outline a possible method for detecting if our world is actually a computer simulation. Physicists have been creating their own computer simulations for years, on a tiny scale. They use a three-dimensional grid to model a minute chunk of the universe, then they run the program to see what happens. This way, they have been able to simulate the motion and collisions of elementary atomic particles.
But these computer simulations generate slight but distinctive anomalies. Could we be able to detect these same distinctive anomalies in the actual universe? In their paper, they suggest that a closer look at cosmic rays, those high-energy particles coming to Earth's atmosphere from outside the solar system, may reveal similar asymmetries.  If so, this would indicate that we may ourselves be in someone else's computer simulation.  But whose?

Do you think that's oxygen you're breathing?

Posted by MrVampire at 5:11 AM