Krukolibidinous is the act of staring at someones crotch.  It's an important word to remember, because there are times when no matter how hard you try to keep your eyes up at face level, they just keep being drawn down to a less than appropriate spot. 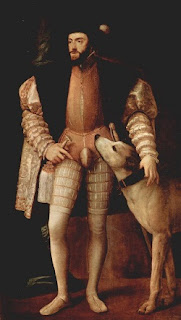 I think they had the right idea in the middle ages with the development of the codpiece.  People are going to stair, so you might as well may a good show of it all.  The codpiece began as a simple piece of fabric to cover the gap in a gentleman leggings. As time wore on it became more elaborately decorated and padded.  Which is a good way to turn something unsightly to something more pleasing.
Posted by MrVampire at 2:36 AM