I've got mixed feelings about the recent news of Disney buying Lucas Films and planning a seventh Star Wars Film.  The good news is there will be another Star Wars film, the bad news is the risk that it gets disneyfied.  On the other hand Disney already owns Marvel and they are doing an OK job and not dumbing down that too much. I'm just hoping we don't end up being delivered a movie like Jar Jar Prince of the Galaxy with ewoks flying X-wings or something just as tragic.

Anyway I realised something about the medal ceremony at the end of the original A New Hope.  At the ceremony Luke and Han get awarded medals and Chewbacca is standing there getting nothing. 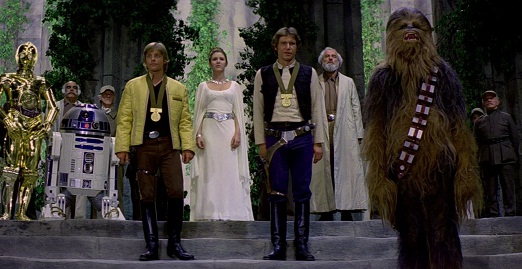 See even in the free republic wookiees are still classed as pets, just a notch above droids.  At least Darth Vaders plan included freeing all people in slavery.

Posted by MrVampire at 3:54 PM