Philippic means a verbal denunciation or condemnation, often in a speech, characterised by harsh, insulting language.  What I like most is how positive it sounds.  To me its sound invokes feelings of the word terrific. 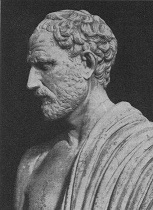 The word also refers to any of Demosthenes's speeches urging Athenians to rise up against Philip II of Macedon in the fourth century BC. which is the origin of the word.  Ironically though, these speeches failed to effectively warn the Greeks of the danger of Philip of Macedon, who turned out be Alexander the Greats Dad.  Later in 44BC Marcus Tullius Cicero of Rome consciously modelled his own series of verbal attacks against Mark Antony on Demosthenes's and several of these speeches were referred to as The Philippics during the time.
But, for a modern Philippic orator you can't go past Bob Dylan.  A fact which his contemporaries Simon & Garfunkel acknowledged in their 1966 recording of the song A Simple Desultory Philippic (or How I Was Robert McNamara'd into Submission) for the duo's album Parsley, Sage, Rosemary and Thyme.  In the song Simon complains about a man who is, "...so unhip, when you say Dylan he thinks you're talking about Dylan Thomas," the next line in the songs says, "It's all right Ma. Everybody must get stoned." which is a reference to the Bob Dylan song Rainy Day Women No. 12 & 35.  At the end of the song Simon says, "Folk rock," and, after an audible noise, "I've lost my harmonica, Albert." This again refers to Dylan, his music, his harmonica and his manager Albert Grossman.
Have a listen.
Posted by MrVampire at 3:34 AM