Known by several names, English Draughts or American Checkers or, Israeli Damka.  Draughts is the more correct name as it drives its meaning from the verb to draw or move.  Draughts evolved from an old Middle Eastern game called Alquerque some time between the 10th and 13th century.  A Standard Draughts board is 8x8 squares.  International Draughts (also called Polish draughts or international checkers) is a variant played on a 10×10 board.  Malaysian and Canadian Draughts is on a 12x12 board for some reason.  Chinese checkers is neither a variation of checkers, nor did it originate in China. 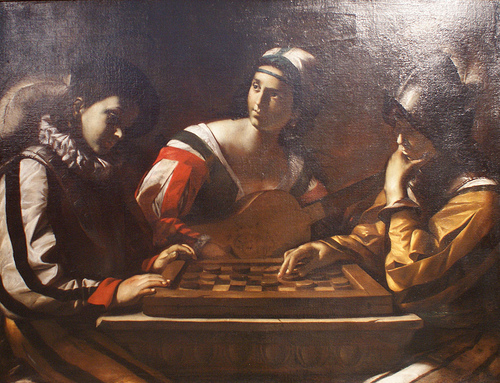 In most non-English languages draughts is called dames or damas, or a similar term that refers to ladies. Pieces are usually called stones, or some similar term that does not imply a gender, but are called dames or ladies when crowned.  Official rules state play is on the dark squares.  If you play on the light squares, you're just doing it wrong. 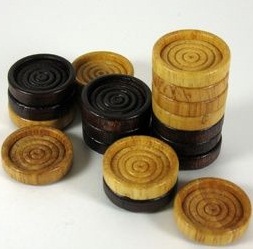 One rule of long standing that has fallen out of favour is the "huffing" rule. In this variation jumping is not mandatory, but if a player does not take their jump (either deliberately or by failing to see it), the piece that could have made the jump is "blown" or "huffed", i.e. removed from the board. After huffing the offending piece, the opponent then takes their turn as normal. Huffing has been abolished by both the English Draughts Association and the American Checker Federation.


Under International Draughts rules: non-crowned pieces can also capture backward (not only forward). Crowned pieces, can move freely multiple squares in any direction (like a bishop in chess) and may jump over an opponent piece some distance away and continue moving afterwards.