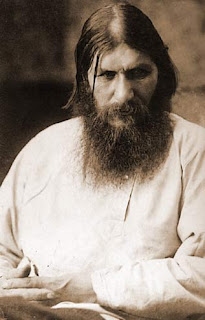 Many legends surround the pilgrim, mystic and faith-healer Grigori Rasputin, one-time advisor to the Romanov family and, as Boney M famously put it, 'Russia's greatest love machine'.  Of all the famous fables, few are quite as entertaining as the stories concerning the hairy monk's sizeable genitalia. Since his assassination in 1916 many people have claimed to have acquired the legendary phallus.

One would think that the Russian mystic and royal advisor was buried with his wedding tackle intact. Well some beg to differ. According to legend (not unlike the Holy Grail) a maid came into possession of the prize privates after Rasputin's death. Some say that Rasputin was castrated by his assassins and that the maid found the dismembered member when cleaning up the mess.  Others claim that she was one of the mad monks many bedtime companions and severed the sausage as a souvenir.
Whatever the truth of the matter, the allegation remains that: Rasputin's penis is at large in the world. And much like it did in its attached state, it is wont to wander.  It next turned up in Paris during the 1920s, where a group of Russian ex-patriates worshipped the wondrous weiner, believing it would bring them fertility. 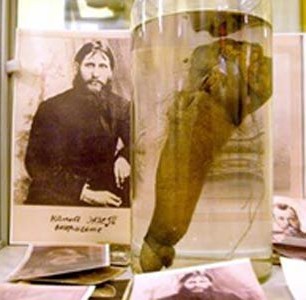 On finding out about this crazy cult, Marie Rasputin (the mad monks daughter) expressed her disapproval of such goings-on and demanded the return of her dads dipstick.  Then, just when it seemed that the shaft had finally shrunk into obscurity, it popped up again in 1994. A Michael Augustine of California acquired the johnson by accident when he purchased the effects of a Dr. Ripple in 1977. Dr. Ripple had collaborated with Marie Rasputin on a hagiography of her father, and had inherited the wang on her demise. However, after Augustine sold the item in question to Bonham's auction house, tests were done and the suspect organ turned out not to be a penis at all but a sea-cucumber. 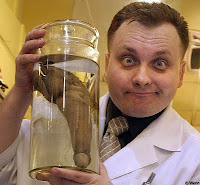 The latest twist in the trouser snake saga involves Russian doctor Igor Knyazkin, head physician of the Prostate Centre of Russia's Academy of Sciences. Igor decided to open the nation's first Museum of Erotica in 2004, inside a sexual health clinic, in order to display some of the 15,000 items he has amassed during his time as a sex object collector.  Amongst them is none other than the alleged appendage of the mad monk himself.  Measuring an unsightly 11 inches (nearly 30cm) long, it certainly measures up to the legendary reports of Rasputin's pork sword.  According to his daughter Marie the monks todger stood a throbbing 13 inches when standing at attention. (It’s best not to ask how his daughter became aware of these specific details).

Unfortunately no tests have been conducted on Dr. Knyazkin's pickled pecker, which raises some suspicion, and the general consensus amongst zoologists is that the ostracised organ most likely once belonged to an equine or bovine animal.  Will the real Rasputins Penis please stand up.


Here's Boney M doing there song about Rasputin.  It's a black German dancing as a Russian monk.
In a strange twist of coincidence, Bobby Farrell from Boney M was found dead from heart failure in a hotel room in Saint Petersburg, Russia, where he had been performing at the age of 61 on December 30, 2010.  He died on the anniversary of Rasputin's death which also occurred in St. Petersburg.
Posted by MrVampire at 12:32 AM